Response to "The Frog Prince, the Matrix, and the Way of the Cross" by Bruce N. Fisk

Well, Bruce, you are hardly "a droning tour guide"! You have pointed out the features of this Christological Grand Canyon with clarity, wisdom, and wit. But let me now play the part of a tourist – the really irritating kind that talks too much and thinks he knows more than he probably does. My unsolicited observations and questions are the kind of thanks you can expect in this crazy profession of ours. That’ll teach you!

I have three goals here: (1) To underline the problems and pitfalls that interpreting this passage poses for Christian theology and ethics, in order to dramatize what is at stake in reading the hymn right; (2) to rehabilitate the "second Adam" reading that Bruce considers but does not focus on; and (3) to ask whether we may endorse both these readings, in a way that solves some of those problems and pitfalls.

Wittgenstein claims that we do not merely see things neutrally, but inevitably see as. We see the hymn as a particular story, and the force of that overall image determines where we locate its individual details. Furthermore, he claims that grasping certain pictures of how the world works is "enough to make me change my whole life." We are here talking and singing about Philippians 2:5-11 because it is one of those texts that changes how we see everything. Yet the converse is also true – how we see everything also changes how we see this text. Our visions of kenosis affect our whole lives, and vice versa. And the expectations we bring to the text are as likely to distort the ways we appreciate it, as to clarify them. We had better make sure they are taking us in the right direction. Our interpretations will either bring clarity to God and ourselves, or distort them beyond recognition. We have to be very careful to see this hymn truly, lest we be lost. Let me rehearse, rather crudely, some of the history of this hymn’s interpretation, in order to point out interpretations and assumptions that some of us – not objective and presupposition-free biblical scholars, mind you! – may be bringing to the text.

The early Church speculated that the pre-existent Jesus refused to exploit his divine attributes when on earth, much as Samantha Stevens refuses to use her witchcraft on Bewitched (but a lot more consistently). Modern Germans speculated that Jesus "banked" his divine attributes, depositing them in a heavenly safe-deposit box, or else shed them – or even shed divinity itself – much as Swartzenegger and villain both put their automatic weapons out of reach for the obligatory hand-to-hand sequence in which good and evil battle nakedly and therefore decisively. All these accounts make my head hurt, not just because they are unimaginable, but mainly because they can cause deep theological and ethical problems. If kenosis is a neglect or stripping away of divine qualities, then God incarnate is sort of a reverse indicator of what God is really like: He’s limited, (relatively) ignorant and powerless, and mortal rather than omnipresent, omniscient and omnipotent, and impassible. Then how does the incarnate Son really show the invisible God? How can we know what God is like, if God refuses to show us his stuff? And if kenosis is incarnational descent, why isn’t ascension "disincarnation," the kind that Neo the Gnostic accomplishes every time he picks up his virtual telephone extension?

The ethical problem is even more grave: How do we follow Paul’s directions and share in this emptying? By emptying ourselves of our divine glory? Our human qualities? How can our stories tell this unrepeatable story?

To save us from these theological and ethical migraines, Bruce asks us to see kenosis as about "addition" (of obedience) rather than "subtraction." This is a profound suggestion, perhaps making obedience a human attribute "imported" into the Son through the incarnation’s communication of attributes.

But does it really help? If slavery and obedience are not something originally divine, then what do Jesus’ servanthood and obedience reveal about God? How do they relate to Jesus’ divinity in anything but a contrary or at least incidental way? And then how would our obedience share in the Son’s story, if obedience is consistent with our nature but foreign to the Son’s?

A recent alternative to classical accounts of kenosis has Jesus humanly expressing the self-emptying divine nature in his earthly life and death. Kenosis is a "social descent" that is consistent with God’s glory, not contrary to it. It is neither subtraction nor addition. Yet here the theological and ethical problems can resurface. If the Son’s self-expression reflects his divine nature, then does the Son’s servanthood imply his essential inferiority? When we have Christ’s mind among ourselves, do we imitate a Son who is the slave, and not the equal, of the Father, as the adoptionists, Arians, and Mormons have contended? If instead the Son’s self-emptying reflects a glory equal to the Father’s, then is God limited, ignorant, powerless, and passible, as process theologians claim? Is God male too? Would our Christ-like humility imply our true equality with God, and a coming exaltation that we deserved all along? Is Jesus our Bodhisattva?

All these are potential problems with the traditional vision of the hymn as telling the story of a divine being who becomes incarnate. But is this hymn really about a pre-existent divine being? Or is it about a second Adam? Only recently did I learn of the "second Adam" school of interpretation, from another tour guide (James Wm. McClendon, Jr.). Like others, McClendon reads the hymn as the story of a human being who imaged God on earth the way we all were supposed to. Here is his translation of the passage:

Here Jesus is a second Adam who went right where the first Adam went wrong. Having lived a servant’s life of obedience (2:7-8) and righteousness (cf. 1:11, Rom. 5:18-19), having glorified (doxan, 2:11) rather than marred (kenodoxian, 2:3) the divine image, he was lifted up to the Father’s right hand rather than left to return to dust. His trajectory is not so much a ‘V’ as a slash ‘/’, starting low and ending high. And that life we can share and imitate – not because of the lives we live on our own, but through the grace of our participation in the righteousness of the man and Lord Jesus Christ.

This vision is exegetically defensible and even appealing, though Bruce is right that it is not without problems (why the language in the middle about being in human form?). However, it too is prone to theological and ethical distortions. There are the adoptionism and legalism that often accompany calls to "work out your own salvation with fear and trembling" (2:12) when God’s role in that work recedes (cf. 2:13). There is also the threat such a vision poses to the uniqueness of Christ – after all, weren’t there other obedient servants of God? Is Paul’s example in chapter 3 an alternative to Jesus’ in chapter 2?

I now have two balls in the air: The problems of traditional interpretations, and a basic difference of opinion about what the hymn is about in the first place. Now I plan to add a third, by returning to Wittgenstein. One of his favorite illustrations that we see as, that we bring our interpretations with us, is a figure of a "duck-rabbit" – a figure we inevitably interpret as a duck, or as a rabbit, but never both at the same time. 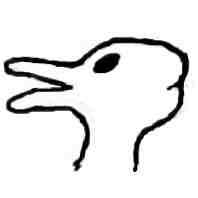 Here is where Bruce’s appeal to Isaiah’s Suffering Servant is helpful. I’m not sure if I want to call either it or Philippians a story of "downward mobility," because that seems overdetermined by the overall image of the hymn as the story of a preexistent divine figure. (Besides, the right-side-up ethics of the Kingdom subvert the very up-down directions they seem to endorse.) I think Paul’s "servanthood" and "humility" (which is not quite humiliation) stay closer to the basic idea of counting others better than oneself.

Isaiah and Wittgenstein and McClendon and Bruce and the mixed results of this passage’s history of interpretation all come together to lead me to see the hymn this way, which is almost like yours: That the Son looked not back upon himself, but to God – and upon and into sinful creation, investing himself radically in it, "considering others better than" himself (2:3), looking "not only to his own interests, but also to the interests of others" (2:4), "becoming in the likeness of human beings" (2:7), being found obedient to God (2:8), and paying the ultimate cost (2:8). Kenosis is a natural expression of Christ’s character, expressed both eternally in the mutual loving servanthood of Father, Son, and Spirit, and temporally in the gracious selfless servanthood of both creation and redemption. Our share in the mind in Christ, then, is simply our servants’ share in Christ’s love for both God and the Church (2:2). It has less to do with descent and ascent than it has to do with fulfilling the greatest commandments (Lev. 19:18, Rom. 13:9, Gal. 5:14) and therefore (yes, therefore) reaping their blessings. Our obedience, like Jesus’ obedience, secures both each other’s lives and our own. This we can share and imitate!

And the amazing thing, the truly wondrous thing of this interpretation is that it works equally well whether we see Jesus as a pre-existent being becoming flesh, or as a human being becoming obedient – as a rabbit or as a duck. For if our Church is right about Jesus, then he is both, and his unique unity of divine and human personhood enables us to imitate what we can never duplicate, and partake in what can never be our own (2 Pet. 1:4).

I had never seen it this clearly before, Bruce. Thanks for the tour!